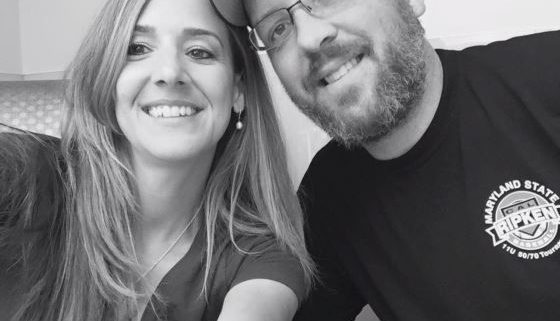 Patrick Erwin and his wife Stephanie have six kids, three of whom are adopted. Their lives revolve around gymnastics, baseball, and birthday parties.

In 2015, Patrick had a grand mal seizure at work. The doctors discovered a brain tumor. And thus began over a year of surgery, chemo, radiation and experimental treatments at Hopkins University. Because Patrick’s awfully young to have brain cancer, he was an ideal candidate for trial treatments. Through it all, Patrick kept his sense of humor, Stephanie has continued working her way through nursing school, and both of them have focused on enjoying life with their family.

After battling through his treatments, an MRI revealed that Patrick’s tumor was back, months before the doctor’s had thought it could resurface. Another round of surgery to remove the new growth went smoothly. However, on July 13, Patrick learned that the tumor had already started to grow back.  He is considering an immunotherapy trial at Johns Hopkins and is currently traveling to Duke University to request a second opinion.

Through our network of friends and supporters, Hope Strengthens Foundation learned about Patrick’s story. After connecting with Patrick, we were able to directly pay for 3 medical bills. The road ahead will include additional medical care and thus, additional bills. Our support will be critical in allowing Patrick and his family to concentrate 100 percent of their energy on getting healthy and not worry about the financial challenges that accompany his treatment.

To help us cover Patrick’s medical and care bills, you can make a donation at:

NOTE: This post contains details from Patrick’s YouCaring website set-up by his colleagues, Rebecca Widiss and Christina Mudd. A big thanks to Rebecca and Christina for allowing us to share background information and updates they’ve organized on Patrick’s behalf.

Matt is on the move!

A Challenge Answered!
Scroll to top