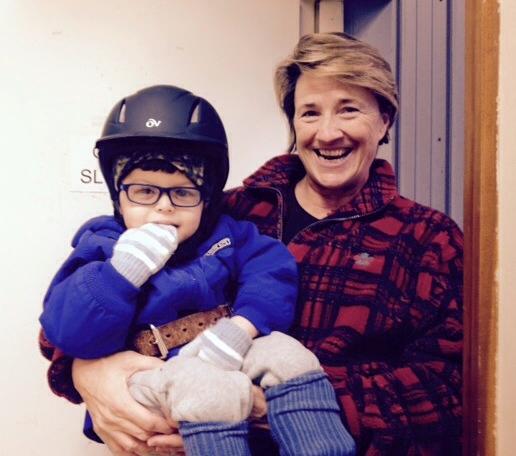 The following post was written by Meg Hajjar, providing an update on her son Neil’s health and participation in hippotherapy sessions that Hope Strengthens Foundation and our donors cover. These therapy sessions are critically important in building Neil’s core strength and assisting with his speech development.

This past Tuesday was the first time in 5 weeks that Neil was able to ride “his” pony Prince with Miss Ruth. Through December, Mane Stream closes to give the therapy horses a well deserved break. Then last week was too cold for therapy sessions. Before the break in December, Neil started to have some behavioral issues… becoming irritable and even crying, which was very new.

Neil has always enjoyed having physical therapy with Prince and Miss Ruth. We were thinking it was because with all the illnesses Neil was having he had missed so many sessions, and was also so much weaker, that it had become much more difficult to ride Prince. Luckily, the past two weeks we’ve been able to have more consistency with his physical therapy in the home and out-patient, so he’s becoming stronger again. This is a very common problem with Neil…. every illness brings a tiny bit of regression that he has to work towards again when he’s all better. That’s why keeping Neil healthy for as long as possible is so important!

So, this past session on Tuesday went awesome and he totally rocked!! His core strength was much improved and he was smiling and very engaging with Miss Ruth and the volunteers. I was so glad that it went well and am hoping with more consistency he can keep progressing. Miss Ruth said he did so well she would want him to come twice a week… with Neil’s hectic schedule that would unfortunately be impossible!!