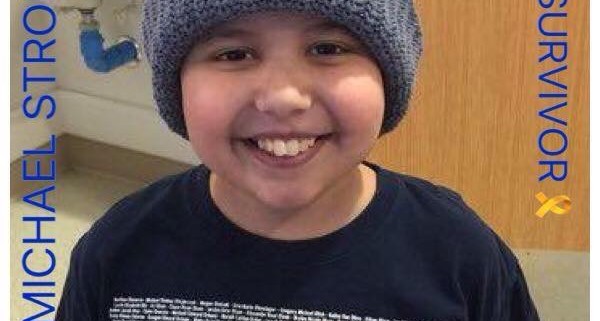 Michael Scala is an 11-year old boy who was diagnosed with leukemia at the age of 9. After a year of intense chemotherapy and radiation, Michael relapsed after being in remission for only 6-months. The next step was a bone marrow transplant. Soon after receiving the transplant, Michael relapsed for a second time in November, 2015.

Michael and his mom, Michelle decided to take a leap of faith and temporarily relocate from their home in Tampa, FL to Boston, MA to take part in a Phase I clinical trial at Boston Children’s Hospital. The trial included extensive chemotherapy since Michael’s cancer spread significantly.

Following the completion of his clinical trial, Michael had a second bone marrow transplant. On Monday, April 18th he will be +60 days post-transplant and he continues to undergo treatment at Children’s Hospital.

Michael’s leukemia has proven very difficult to put into remission. Despite all of this, he has remained in great spirits and continues to fight.

Michael and Michelle are staying at the Ronald McDonald House of Boston but have to commute from there to Boston Children’s Hospital for treatment and other areas across town since they do not have access to a vehicle.

Hope Strengthens Foundation is assisting Michael and Michelle with medical bills and transportation needs associated with Michael’s care. Transportation expenses alone average approximately $150 per month in Uber, Lyft, and taxi fares. Your contribution will help alleviate these expenses and allow Michael and Michelle to concentrate all of their energy and effort on beating cancer.

Michael is an incredibly strong person who continues to fight this insidious disease with everything he’s got. He recently said, “Cancer is like chess; it’s not over unless you have no more moves left in the game!”

Let’s work together to give Michael as many moves as needed to beat cancer.

What a day!
Scroll to top