Meet Peyton and the McCarthy’s 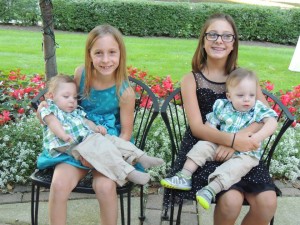 Peyton McCarthy is a 16-month old miracle, and he and his family need our help. Peyton and his twin brother, Kyle, were born at just 28 weeks, 5 days due to complications mom Nichole experienced with the medical condition pre-eclampsia. Peyton weighed 2lbs 5oz and Kyle weighed 2lbs 3oz at birth. Both babies were found to have patent ductus arteriosus (PDA), a congenital disorder in which part of their hearts weren’t closed yet. Doctors tried to fix the PDA with 2 rounds of Indocin. It worked for Kyle, but not for Peyton.

At two weeks old, Peyton got really sick with necrotizing entercolitis. He was intubated and then required bowel surgery but his small body couldn’t handle such a procedure until his heart was fixed and he reached at least 4 pounds. While all this was transpiring, doctors found an aortic coarctation on Peyton’s heart, which basically means his aorta, was narrowing more than normal. Peyton was actually fortunate his heart never closed, as it would not have been able to supply blood to his entire body.

Peyton was transferred to Phoenix Children’s Hospital for his heart surgery, which occurred on September 10th, 2012. Doctors were able to enter through his back, between ribs so Peyton did not have to have a “zipper” scar on his chest. Peyton was transferred back to Thunderbird Medical Center in Glendale, AZ on September 21st since his brother Kyle was still in the NICU there. All of these events made Nichole and husband Martin realize they needed to move from Phoenix back home to Cleveland, Ohio in order to have the full support of family and friends during such a trying time.

On September 26th, 2012, Peyton finally had his first bowel surgery. He went into surgery with 80cm of short intestine and lost 33cm due to the damages necrotizing entercolitis caused. The doctors told Peyton’s parents he was a miracle. He was slowly receiving continuous feedings through an NG tube, a small line going through Peyton’s nose to his stomach.

Doctors told Nichole and Martin that Peyton could fly back to Cleveland with the family in early December. Unfortunately, Peyton soon began to vomit and could not tolerate foods. A few days later, the surgeon found some strictures requiring an additional surgery that caused Peyton to lose part of his colon.

The family was able to fly to Cleveland and Peyton was admitted into the Cleveland Clinic Children’s Hospital on December 22nd, 2012. Since that time, Peyton has had to endure 2 additional surgeries and has been diagnosed with cerebral palsy.

Thus far in his young life, Peyton has experienced extended stays in hospitals in Arizona and Ohio, suffered 3 seizures, and undergone 8 surgeries. Peyton has been diagnosed with cerebral palsy, reflux, PVL, short gut, and global developmental delay. Peyton and Kyle continue to have many doctor visits and therapies. As a result, medical bills remain a significant challenge for the family to keep up with.

Peyton was finally able to return home on April 26th, 2013 and continues to receive feedings through a GI tube. Since leaving their lives and steady employment in Phoenix to be closer to friends and family in Cleveland, the adjustment for the family has not been an easy one. Martin continues to care for the family while searching for a job that provides both the insurance and benefits necessary to cover the expenses associated with Peyton’s cerebral palsy, epilepsy and tube feedings. Nichole has found a part-time teaching position at a nearby school and also works at a local restaurant a few days per week.

Nichole and Martin continue to make enormous sacrifices and do what is necessary to take care of Peyton, Kyle, and their two older sisters, Caitlin and Kenzie. They need our support. Your donations can help make a tremendous difference for this family by covering expenses incurred during this traumatic time. The money you donate will help Nichole and Martin pay for medical bills and the family’s everyday needs as they continue to provide for their Peyton and their incredible family.

Please consider making a difference today by visiting www.hopestrengthens.org/donate-online and pledging your support. 100% of your donation will go to help bring hope and strength to the McCarthy’s.