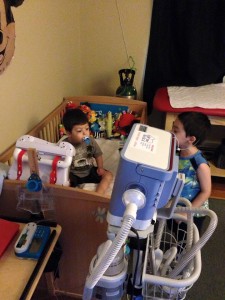 Neil Hajjar was born weighing just 3 pounds and 1 ounce. He spent his first three and half months of life in the Neonatal Intensive Care Unit due to breathing and feeding problems. At nine months of age, Neil was diagnosed with a rare genetic condition called MECP2 Duplication Syndrome. It causes him to have very low muscle tone, developmental delays, intellectual disabilities, severe reflux, chronic constipation, high chance of seizures, many respiratory infections, absence of an effective cough, autistic tendencies and lack of speech. Because of his trouble with respiratory infections Neil has to have many different breathing treatments every day and when he is sick with a virus he needs them around the clock.

Neil has been presented with challenges a young child shouldn’t have to face. Yet he handles it all with a special grace and unbreakable spirit. Neil turns five years old this August. His progress has been slow but steady.

Simple efforts for most of us are viewed as huge milestones for Neil. For example, it’s safe to assume you are sitting upright while reading this. It’s a simple position most of us take for granted. However, the photo you see above was taken moments after Neil’s mom (Meg) walked into his room and saw Neil sitting up on his own for the very first time!

Thanks to our supporters, Hope Strengthens Foundation has covered the cost for Neil’s hippotherapy and other special classes that have helped improve his core strength, balance, and speech.

This targeted support is making a tangible difference for Neil. And we, along with his family, remain forever grateful for your help!

P.S. – a typical hippotherapy session for Neil costs $80 and a month worth of special classes at the local YMCA is $82. Your continued support can make a tremendous difference and help Neil achieve his next great milestone.