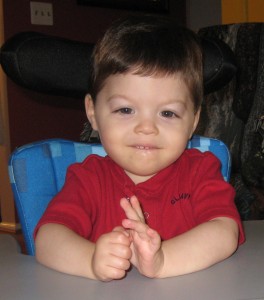 Earlier this week, Neil’s mom, Meg, spoke with one of the neurosurgeons from Boston Children’s Hospital who determined that Neil is exhibiting typical results six months after his brain surgery.

Neil has new vessels growing from the bypass on each side. The new arteries that were laid on Neil’s brain should take over for the arteries affected by Moyamoya disease. Unfortunately, Neil’s Moyamoya did progress and his arteries at the base of his brain have narrowed more. Neil’s doctors expected these results as the surgery doesn’t eliminate the disease. He also has slow blood flow at the back of his brain. The doctors won’t be able to tell if that will improve until the next set of scans, which will take place back in Boston in six months.

Doctors hope that as the new vessels grow they will extend to the back of the brain as well. If they don’t, there is the option of doing a bypass at the back of Neil’s head. Everyone is hoping this will not be necessary.

So for now, the surgery has appeared to have worked and Neil’s family is extremely happy and relieved. Without surgery, Neil would have only had two years to live.

Neil is a true fighter and continues to inspire all those around him. His entire family is grateful for the continued support!