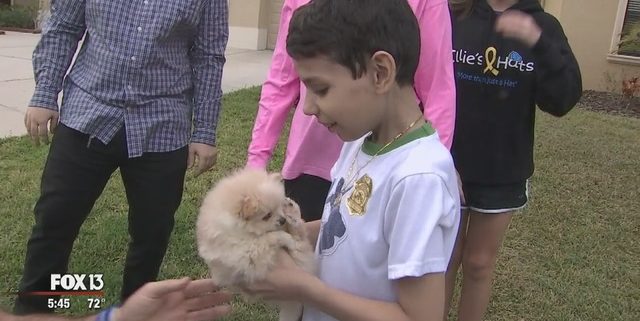 The following video and news story by Fox 13 News features our friend Michael Scala, who received a puppy courtesy of the One Voice Foundation and Hillsborough County Fire Rescue (FL). Michael continues to inspire us all with his bravery and courage. Michael and his mom Michelle need help with medical and care expenses that have accumulated during his fight against cancer. You can provide support today by donating to Hope Strengthens Foundation.

CARROLLWOOD (FOX 13) – A 12 year old with terminal leukemia got one of his final wishes granted Wednesday when volunteers presented him with a puppy.

Doctors diagnosed Michael Scala with cancer in 2013. He’s spent years getting chemotherapy, radiation and bone marrow transplants. He’s even been a part of several clinical trials, all of which failed.

“[He’s had] lots and lots of procedures. He’s had a gall bladder removal, a couple liver biopsies. Multiple other surgeries along with that and many ICU visits as well,” said Michelle Silverio, Michael’s mom.

Michael and his mom came up with a bucket list. One of Michael’s final wishes was to have a dog.

Along with help from the One Voice Foundation and Hillsborough Fire Rescue, Michael got a pomeranian puppy Wednesday.

A fire truck showed up to make the presentation extra special.

Michael named the pup Murphy and said he expected the dog to comfort him as he continues his struggle with the illness.

He still has another wish, that someone finds a cure for cancer.

“Hopefully one day we can figure out a cure to help everybody and you know make sure nobody has to go through this ever again,” said Scala.

In memory of Michael Scala
Scroll to top