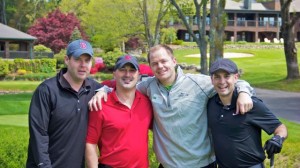 This Saturday, Ronnie Teague, a carpenter from Gardner, will receive a helping hand from three men he has never met.

Mr. Teague does not know Islanders Jacob Ferreira and Joe Merry or their longtime friend Jim Fahey, who formed the nonprofit Hope Strengthens Foundation in 2010 to help people and families who are in trouble as a result of injury or illness.

Nor will Mr. Teague be at a pig roast held to benefit him and his family at the Tisbury Spring Building (formerly the Tisbury waterworks building) at 1 pm on West Spring Street in Vineyard Haven this Saturday. He will be in a Boston hospital with massive head injuries sustained in a fall while helping a friend repair his roof. Mr. Teague is one of several people, in places from the Island to Oklahoma, who have received $23,000 in donations over the past three years from Hope Strengthens, an organization with Island roots and steeped in the Island community culture of helping those in need.

Islander Joe Merry was the catalyst and the inspiration for Hope Strengthens, co-founder Jacob Ferreira said in a telephone interview from his post as a lieutenant in the Coast Guard in Alameda, Calif., this week.

“Joe and I grew up together on the Island. We met Jim in college. After Joe was diagnosed with testicular cancer in 2008, Jim and I put together a pig roast to help cover Joe’s expenses when he was in recovery. The idea came from an annual neighborhood summer pig roast that the Merrys hosted for years. We always looked forward to it.

“The community response was amazing and we thought maybe we could help some other people. We formed Hope Strengthens Foundation in 2010. The words hope and strength in our name came from a blog Joe kept during his illness to update family and friends on his progress. He told us that those words were the two most important words to him and they kept showing up in his writing.

“Joe’s the director of Hope Strengthens. We don’t use a formal organization structure. We are literally facilitators between people in need and the community that surrounds them. Usually people don’t want to reach out for themselves, to be seen as needy, and families don’t always know how to reach out.”

The three men behind Hope Strengthens are self-effacing (Mr. Ferreira and Mr. Merry are 33 and Mr. Fahey is 34) and in separate interviews they were prone to give the credit to each other. While they are busy with careers and families, they show up as dedicated to their mission and they are smart.

“I like to think I’m along for the ride,” said Mr. Fahey, a former National Hockey League player who works in sales for computer data storage giant EMC in the Boston area. Mr. Fahey lives in Walpole, where Mr. Teague’s accident occurred. He heard about Mr. Teague’s plight from the community, resulting in Saturday’s event on the Island.

“Jacob is the brains and Joey is the inspiration,” he said.

“Finding families with troubles is easy. We will never run out of customers.”

The founders quickly found out that urgency was a key to helping and their status as a 501(c)(3) nonprofit and the existence of their website were important tools. They have constructed a tab on the website which encourages people to contact them with a story of need. The partners vet the story for suitability, and then post the particulars to encourage response.

Now, with several years of experience themselves, the three men are able to consult with advocates on how to organize an event in their local community. Hope Strengthens thus is able to help directly and to assist others to take action in their own communities.

“We are a vehicle as a 501(c)(3),” Mr. Fahey, a Milton native, said. “People engage us and ask us to help out. We encourage use of our nonprofit designation. It’s a repeatable process, and using the website is important. People need help now. They are dealing with a tragedy. They don’t have the time or focus to set up a 501(c)(3). It’s just one way we can help.

“When we do an event, we try to gear to the family or person. We are geared to help people get up and running right now. For example, we sent a small check to the Teagues and his brother-in-law partnered with us to set up a local fundraiser, using our website,” Mr. Fahey said.

“We think we can get as big as people let us become,” Mr. Merry said. He has been cancer-free for about three years, but the memory of his illness is clear in his mind. He knows what is critical in that situation.

“We do want it to be as instantaneous as possible. You really are only as strong as your support group — community and family and strangers.

“We don’t know everybody we try to help. We helped a family in New Jersey with a small donation. They were literally down down to their last buck. The donation was small, but it gave them a little breathing room.”

Hope Strengthens is a bootstrap organization, funded initially by contributions from its founders. The foundation is moving into another developmental phase: it has sponsored a second annual golf tournament in Walpole and will stage an annual Columbus Day weekend pig roast on the Island, just as the Merrys did in the past.

The group is partnering with other larger nonprofits, including The Dana Farber Jimmy Fund in Boston and a golf charity funded by Charles Schwab investment firm.

“Why do we do this,?” Mr. Ferreira said. “We saw an opportunity to make a dramatic impact on one person, and it didn’t take long to see we could do it for others. We see that, ultimately, while the support is profound it can fade over time and many people are going to have challenges for a long time. We can help to keep community in people’s lives. So we are a catalyst. We can be a hub for this help and it’s amazing to see people respond. Sometimes it doesn’t take much more than that.”

More information on Saturday’s event and on Hope Strengthens resources is available at hopestrengthens.org.

The full article is available at the following link:

Update on Ronnie Teague Thank You!
Scroll to top