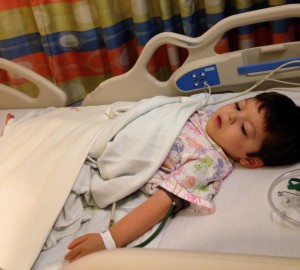 Late last week, Neil Hajjar returned to Boston Children’s Hospital for his 1-year follow-up angiogram to observe the results of his brain surgery which occurred on July 31st, 2013.

Prior to the surgery, Neil’s brain was being deprived of so much oxygen and blood that he was left incredibly weak and exhausted. Following the surgery, Neil had more energy, ate better, and was able to smile and laugh more often.

Hope Strengthens Foundation and our supporters are honored to help Neil by assisting with medical expenses associated with his care for a neurodevelopmental disorder, including hippotherapy sessions that improve Neil’s core strength and speech.