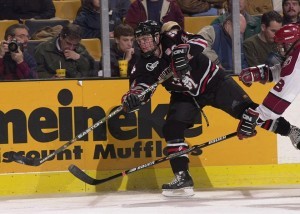 Great story about our Co-founder and Director, Jim Fahey appeared this week in the Boston Globe…

Jim Fahey never won a Beanpot title when he skated for Northeastern University, but the annual tourney remains dear to his heart.

As a kid in Milton, he grew up watching the storied event. As a college sophomore in 2000, the 6-foot, 200-pound defenseman scored his first goal of the tourney against Harvard.

“I can pretty much remember every single year going into the Beanpot, especially my senior year,” said the 36-year-old Fahey, who retired after an eight-year professional playing career in 2011.

“We ended up losing to BU (5-3), but the whole idea of being in the finals was great and we were up by a couple of goals late in the game.

“It was probably the biggest letdown of my hockey career, but there are not many places you can play on a Monday night in February and have that kind of emotion with 17,000 people from the city of Boston.”

Fahey was a two-time captain at Catholic Memorial, where he helped guide the Scarlet Knights to four state titles. He was chosen by the San Jose Sharks in the eighth round of the 1998 NHL Entry Draft.

He made a fast impression at Northeastern, earning a spot on the Hockey East All-Rookie team after scoring five goals as a freshman. A two-time captain at NU, Fahey piled up 46 points (14 goals, 32 assists) his senior season, setting the single-season record for points by a defenseman. Fahey (111) is one of five defenseman with 100-plus points in program history.

One of 10 finalists his senior season for the Hobey Baker Award, presented to the top player in college hockey, Fahey was inducted into the Northeastern Varsity Club Hall of Fame in 2012.

Fahey and his wife, Brenell, live in Walpole with their two sons, Cullen James (7) and Shay Alan (5). Both children play hockey. A regional director for Medallia, a software company based in Palo Alto, he is also the co-founder and director of the Hope Strengthens Foundation, a charity that provides financial support to individuals and families facing life-threatening illness or recovering from traumatic injuries.

Fahey played parts of four seasons in the NHL, mostly with San Jose and New Jersey. In his first year with the Sharks, he led all rookie defensemen in scoring with one goal and 19 assists in 43 games.

He has not missed a Beanpot since he retired as a player.

“It’s great to go in and see everyone,” he said. “It’s such a special night.”