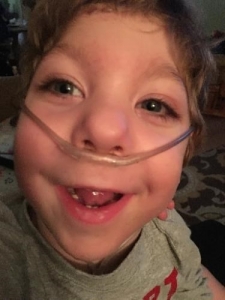 “Peyton McCarthy was a miracle.”

Peyton McCarthy was a miracle. He and his twin brother, Kyle, were born at just 28 weeks, 5 days due to complications mom Nichole experienced with the medical condition pre-eclampsia. Peyton weighed 2lbs 5oz and Kyle weighed 2lbs 3oz at birth. Both babies were found to have patent ductus arteriosus (PDA), a congenital disorder in which part of their hearts weren’t closed yet. Doctors tried to fix the PDA with 2 rounds of Indocin. It worked for Kyle, but not for Peyton.

At two weeks old, Peyton got really sick with necrotizing entercolitis. He was intubated and then required bowel surgery but his small body couldn’t handle such a procedure until his heart was fixed and he reached at least 4 pounds. Peyton was transferred to Phoenix Children’s Hospital for his heart surgery. These traumatic events made his parents realize they needed to move from Phoenix back home to Cleveland, Ohio in order to have the full support of family and friends during such a trying time.

Peyton experienced extended stays in hospitals in Arizona and Ohio, suffered 3 seizures, and underwent 8 surgeries. Peyton was diagnosed with cerebral palsy, reflux, PVL, short gut, and global developmental delay. Peyton continued to have many doctor visits and therapy sessions before passing away in 2019.

Hope Strengthens Foundation had the privilege of working with Peyton’s family to help cover medical expenses and basic needs prior to his passing.