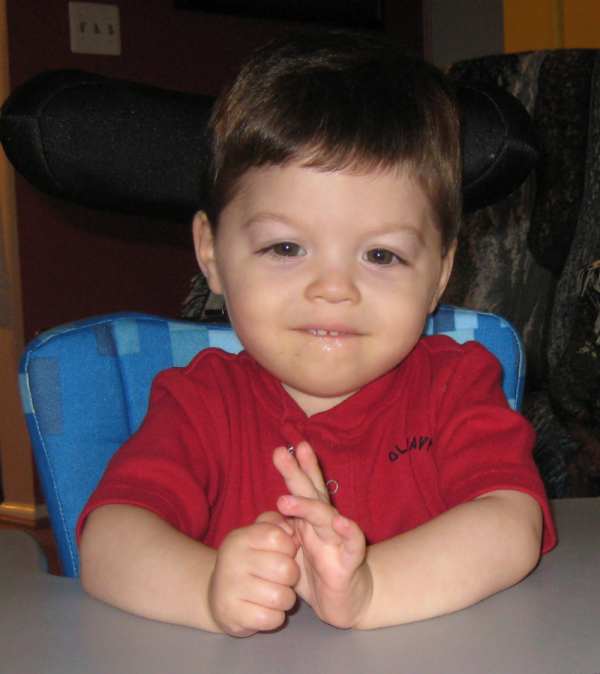 “Despite his daily struggle, Neil is an amazing and happy boy…”

Neil Hajjar was born weighing just 3 pounds and 1 ounce. He spent his first three and half months of life in the Neonatal Intensive Care Unit due to breathing and feeding problems. At nine months of age, Neil was diagnosed with a rare genetic condition called MECP2 Duplication Syndrome. It causes him to have very low muscle tone, developmental delays, intellectual disabilities, severe reflux, chronic constipation, high chance of seizures , many respiratory infections, absence of an effective cough, autistic tendencies and lack of speech. Because of his trouble with respiratory infections Neil has to have many different breathing treatments every day and when he is sick with a virus he needs them around the clock. He also has a g-tube that he uses for thin liquids and his medications because he is very high risk for aspiration.

Neil cannot talk, crawl or walk, but he can sit unassisted with some balance support. One of his favorite things to do is listen to music, especially when someone sings to him in person. He loves to swing and bounce, which also helps to keep him calm and focused throughout his day. Despite his daily struggle, Neil is an amazing and happy boy, who just wants to be around those he loves.

Thanks to your support, Hope Strengthens Foundation has paid for Neil’s hippotherapy and other critical therapy sessions that have helped improve his core strength, balance, and speech. We were privileged to cover expenses associated with Neil’s brain surgery at Boston Children’s Hospital to help alleviate symptoms of his Moyamoya disease and we have purchased a special changing table and therapy equipment to help Neil lead a more normal life.